For those of you who are still reading this blog, I’m sure you’ve noticed that I’ve become a horrible blogger… There is no greater proof of that than the fact that it has taken me over a month to write this post! But don’t let my lack of blogging enthusiasm make you think that I was not over-the-moon excited about the events behind this long overdue post… I guess I should start at the beginning.

When I first met all of “my” babies in Ukraine, two of them already had families coming for them while the rest were waiting in one capacity or another. Waiting for a family to choose them, waiting to be listed, waiting to become available… Since meeting my babies and holding them in my arms for the first time, six of them have had families commit to them. Over the past year or so however, one of those babies went to be with Jesus, one became unavailable at the request of his biological parents (although he is now once again available for adoption!) and two more lost their families when they were taken to an orphanage that does not allow international adoption. One other little one’s family is still working hard to bring him home. Nineteen months since they first captured my heart, nineteen months of hoping and praying and advocating for these precious little ones and, aside from the two who already had families committed to them when I met them, I still hadn’t seen any of my kids go home to their forever families. Honestly, it’s one of the reasons I’ve become such a horrible blogger… I’ve grown weary… oh, how I needed this: 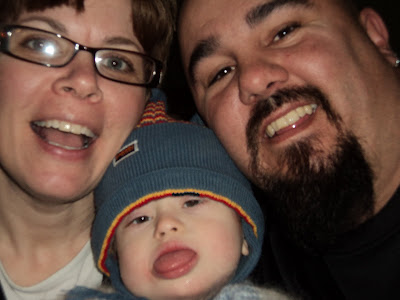 On January 18th Andrey met his parents for the first time. It was so exciting but, after all that has happened, I refused to allow myself to get all the way excited until he was officially home. On March 2 Andrey finally arrived “home” on American soil and I couldn’t have been happier for my teddy bear and his new family!

Andrey was taken straight to the hospital where he was admitted with severe malnutrition with possible refeeding syndrome, dehydration, electrolyte imbalances, hypothyroidism, hypoglycemia, acute renal failure, bowel obstruction, h. pylori, and giardia. I am happy to report that poor little guy was feeling much better fairly quickly and aside from that, he has been doing very well and surprising everyone just like I knew he would! Just a few days after his mama busted him out of the orphanage, Andrey was scooting across the room, pulling himself up on the couch and holding his hands out to be picked up. Just a week after his gotcha day, before he even made it home, Andrey had already learned to sign "more" when eating and to say "Momma" and "hi" to whoever they were talking to on Skype! Smart cookie indeed :) I’ve said it before and I’ll say it again… you, little man, are going to CHANGE THE WORLD!

You can read more about how Cooper is doing in his new, forever family by following their blog here.

An amazing little boy in an amazing family! God knew who his family was supposed to be, just like He does with your other angels. Hang in there...what you do makes a difference!