And speaking of school...

Look who's officially a preschool graduate! :) 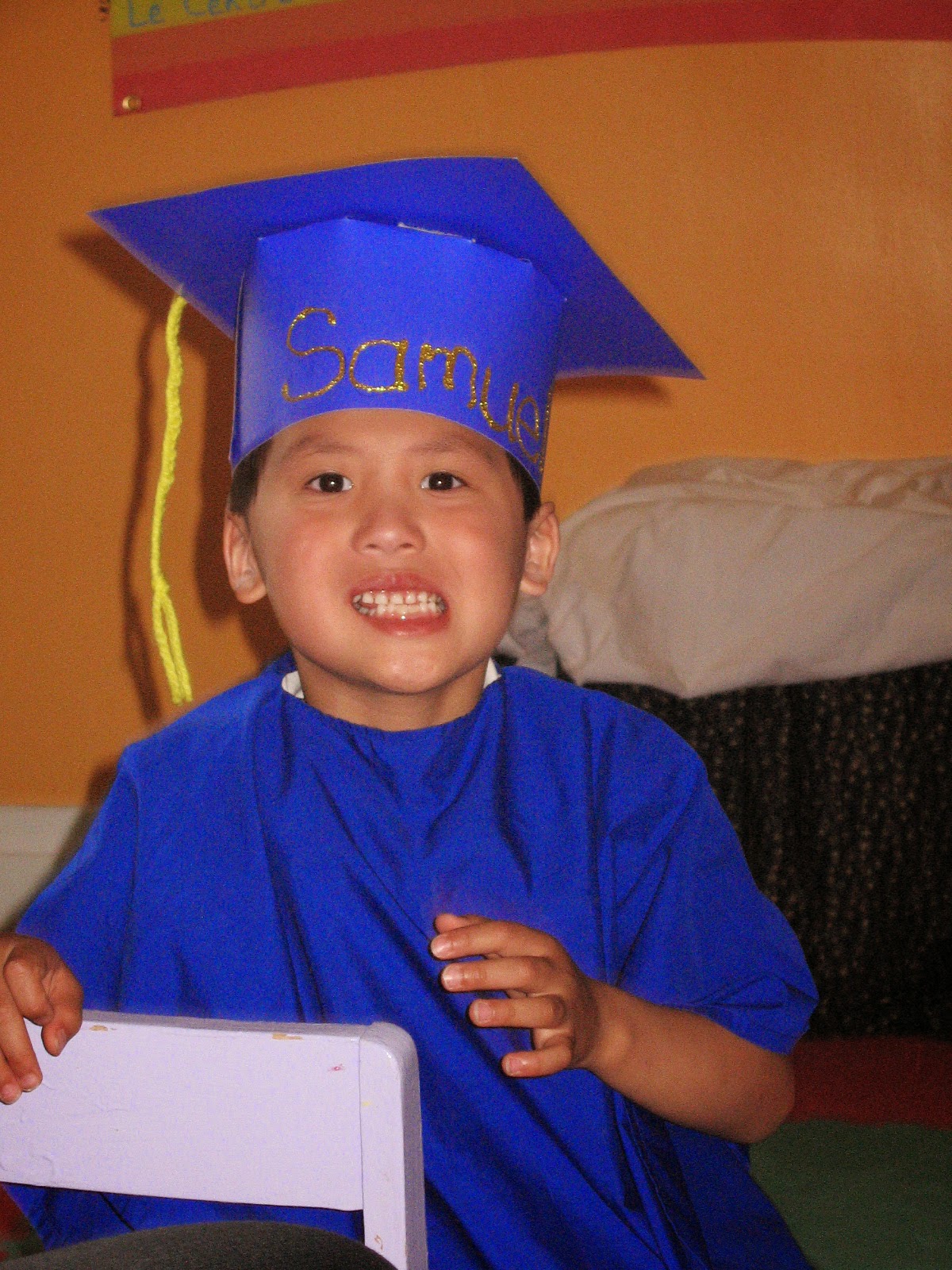 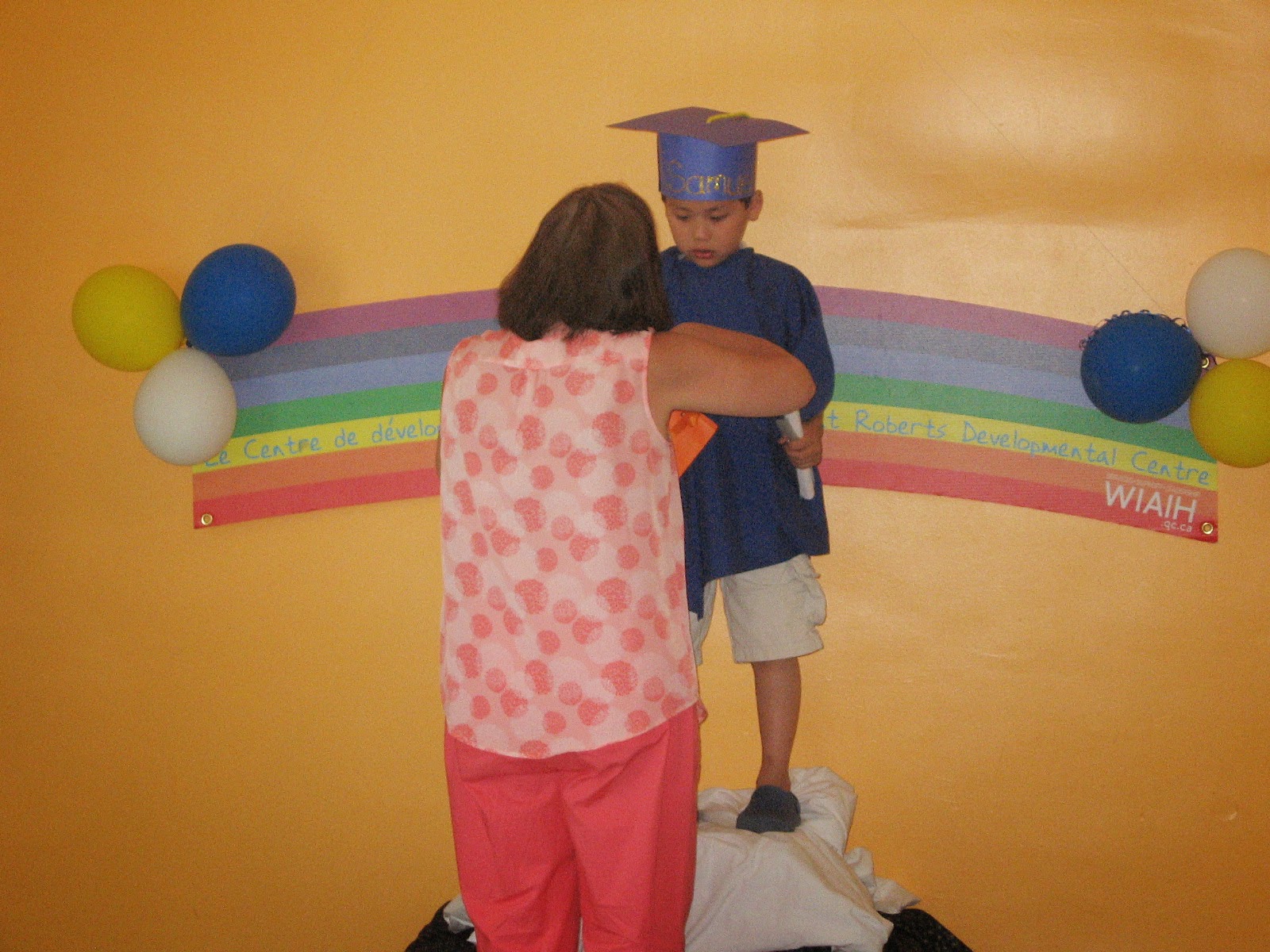 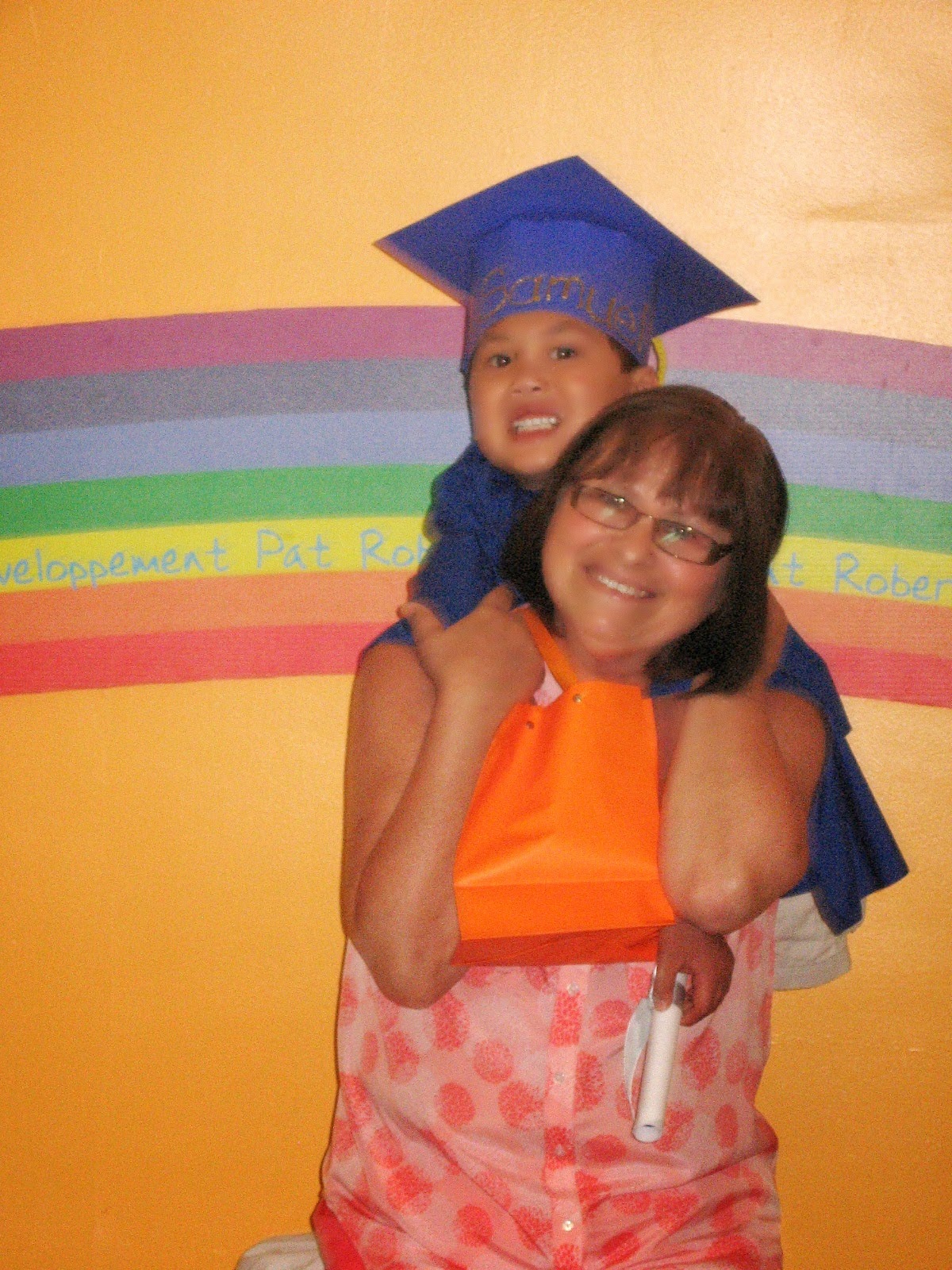 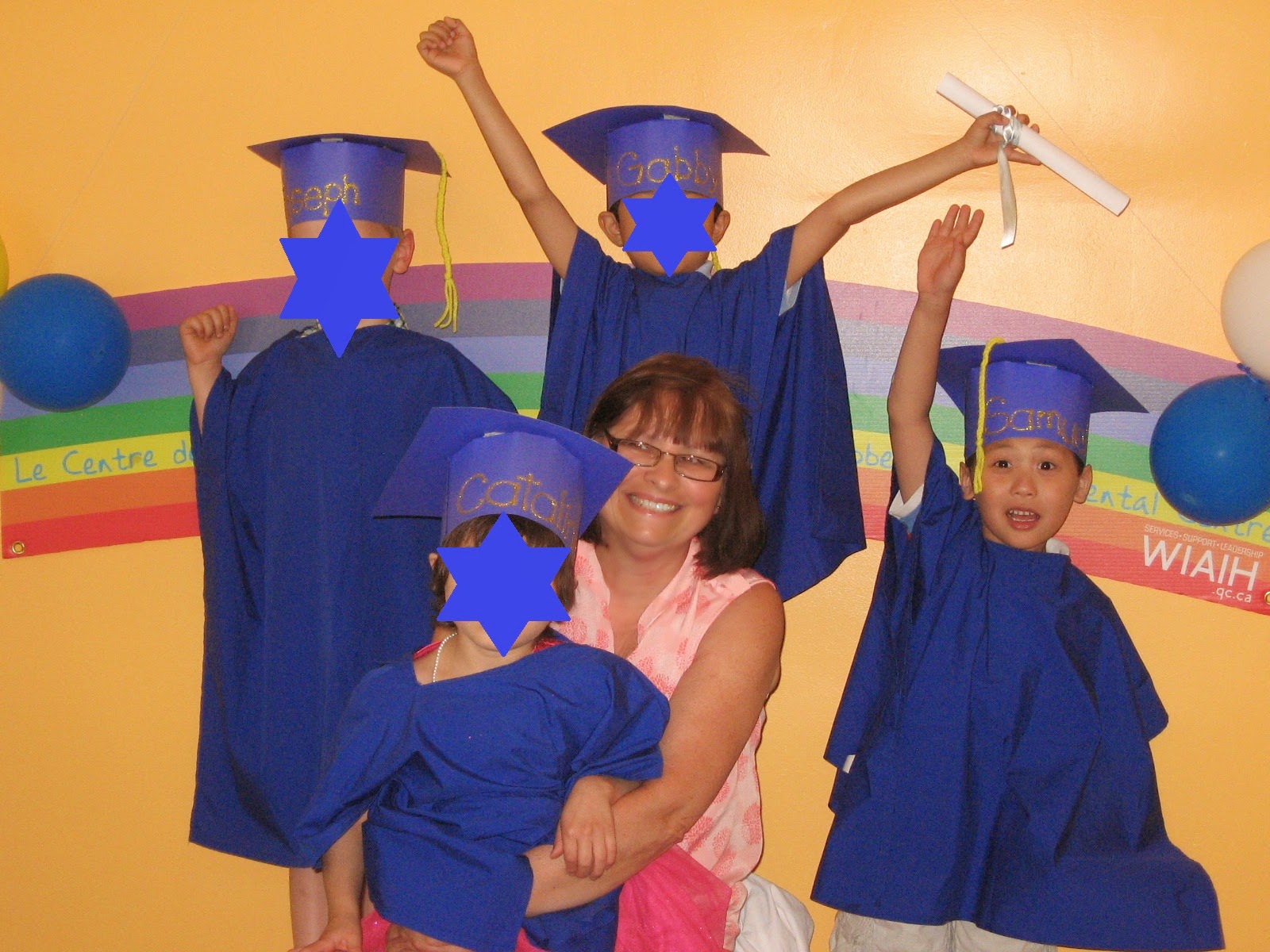 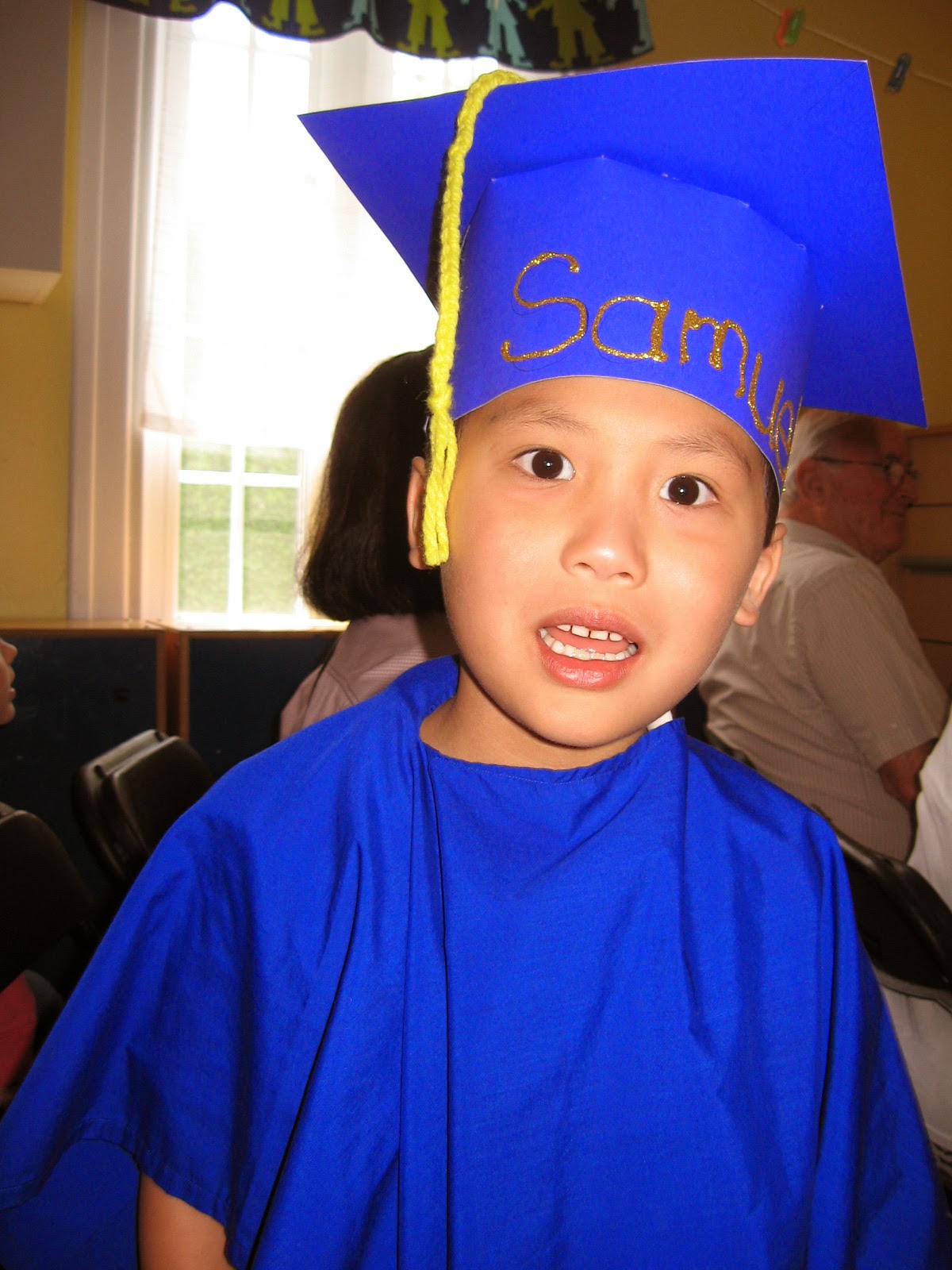 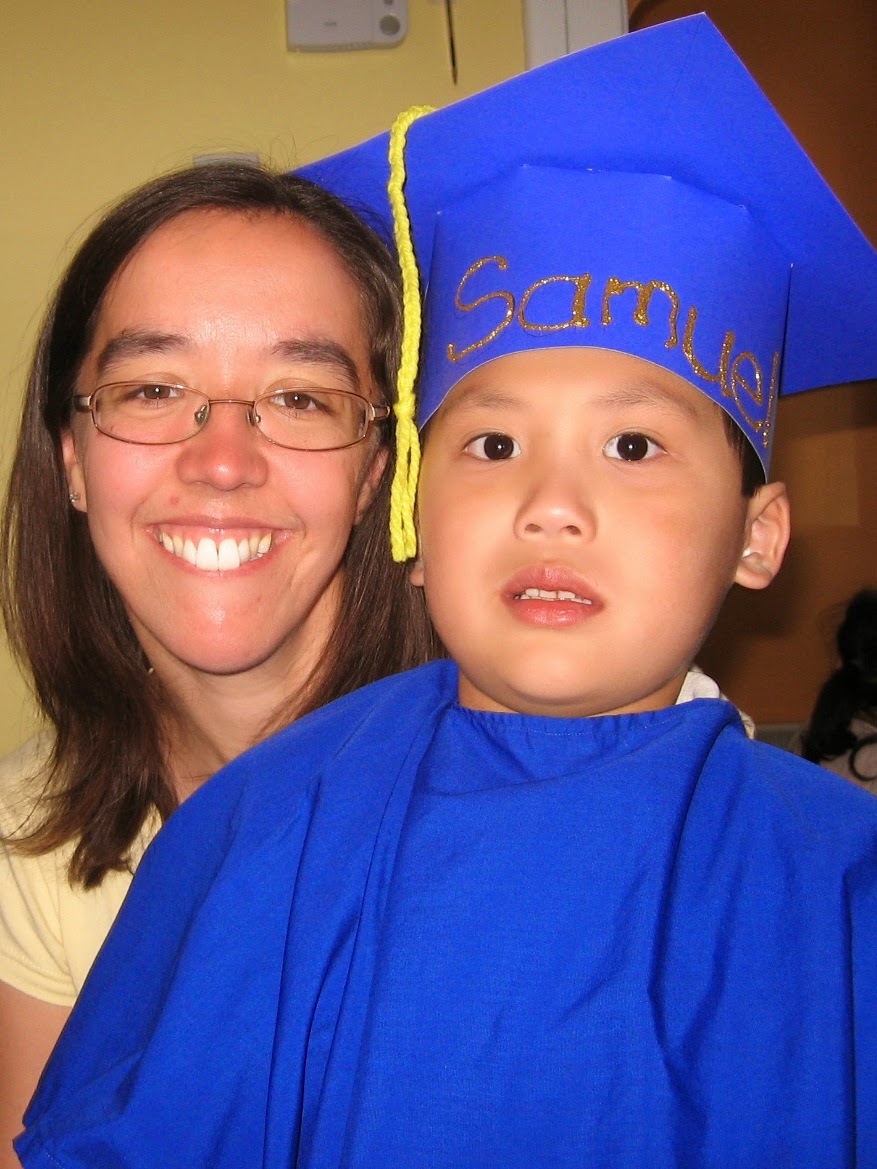 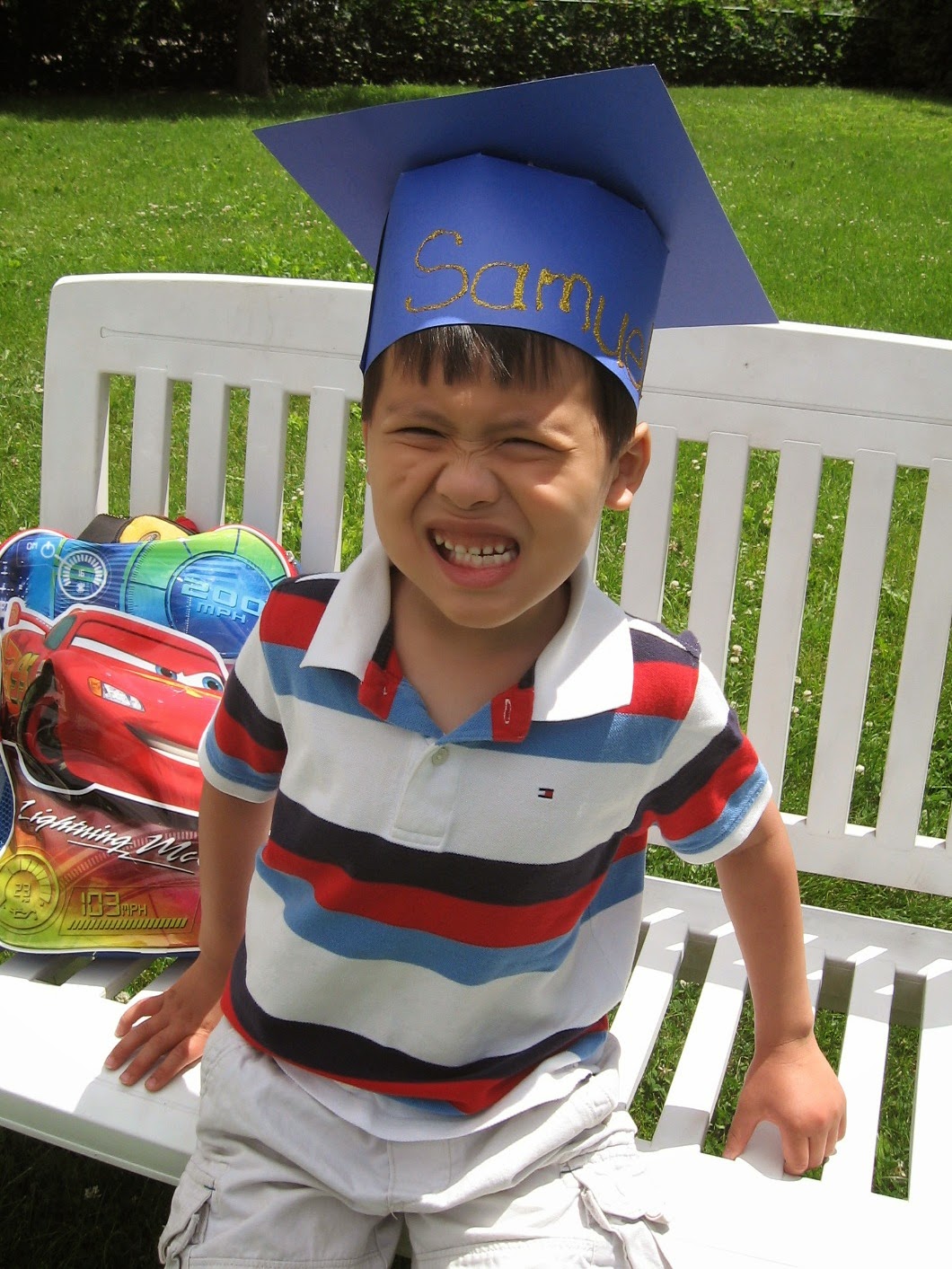 I know, I know... It's been three whole months... Where are we?!?!
The truth is, the last three months have gone by so quickly it feels like I just blinked and all of a sudden "spring"
(kind of non-existent here in Montreal this year) is over and summer is here.

You know, I never could have imagined that Samuel and I would be so busy. If you had asked me last summer what my year off with Samuel was going to look like, I would have told you that it was going to be quiet, lots of time spent at home just the two of us, building our attachment and helping him get comfortable and secure in his new environment. Not too many activities and definitely no programs for Samuel that did not include me. And that's exactly what our first six months looked like. Over time however I started to question whether a whole year like that was really what was best for Samuel. As I said in my last post, Samuel was doing miraculously well as far as attachment goes. Of course that doesn't mean that we should stop working on attachment but I was realizing that it was not where I needed to be focusing 100%  of my energy and efforts anymore. In the meantime, Samuel had absolutely no interest in other children and would only engage with adults. He refused to do anything structured at home (except cooking of course) and I couldn't get him to stay still for more than 30 seconds. And while he would happily be babysat one-on-one by family members, he would not stay in Sunday school with other children even if Grandma went with him. For all these reasons and more, I started to really worry about how Samuel would do when he had to start school full-time in September. And so at six months home I decided that Samuel and I had a new full time job - Get Samuel Ready For School.

I had three goals in mind:
1) For Samuel to be comfortable being away from me for an hour or two at a time,
knowing that "Mama always comes back".
2) For Samuel to become comfortable around other children and maybe even begin to engage with them.
3) For Samuel to get used to structure, to be able to follow classroom-like routines without running wild all over the place and for him to begin to participate appropriately.

In March I agreed to visit a special-needs preschool with Samuel, thinking that I wasn't going to send him but that I might as well take a look. Well, what I thought was going to be a 20 minute visit at the beginning of their day turned into me begging Samuel to leave 2.5 hours later after all the other kids had gone home. Samuel started attending preschool the next week and it has been the best thing I could have done for Samuel. He is in a class with three other students who are so perfect for him and a teacher who he absolutely adores. The school has been accommodating even though it is a four day program, allowing Samuel to attend just two afternoons a week at first, then three afternoons starting in May when I saw how much he loved it, how much he was learning and that it was having little to no negative impact on our attachment.

In the meantime, Samuel and I have been attending playgroups together every weekday morning ranging from a highly structured school-readiness program for children with delays to a very laid-back moms & tots group as well as a post-adoption group that focuses on attachment while allowing Samuel the opportunity to interact with other adopted children (we both liked this group the best!).

Add to all that regular speech therapy, trips to the pool and arena, visits with family, playing outside, etc. it's no wonder I haven't found time to update my blog! In my work with other families, I would never recommended such a busy schedule and I certainly never anticipated that this is what our day-to-day life would look like. But one thing I've learned since becoming a mom is that there truly is no textbook and that the best thing for your child may be the very thing you thought you'd never do. I have learned that when you have a child with an attention span of three minutes (on a good day), even just a few unstructured hours at home can  become very frustrating for both of us. The constant activity may not be what's recommended but it's worked for us. And the results, well, they speak for themselves. At Samuel's Kindergarten Open House last week, he walked off (no mommies allowed) with his new teachers and a group of children all of whom he did not know and came back an hour later with a smile on his face. He is not just comfortable but social with other children. He has actual friends at his school and special needs play group, his very first "girlfriend" at our post-adoption group (the most adorable little girl from the Philippines who is absolutely smitten with Samuel and giggles at everything he does), and he regularly approaches other children he does not know at the park wanting to play with them. Samuel has also developed the ability to sit for up to 45 minutes at a time (just not at home!) and likes "circle time" so much that he wants to play it at home. In addition to all of this, Samuel's increased focus has helped him to begin learning some "pre-academics" (which was not even on my list of goals yet)... Samuel can officially count to ten and recognizes about half of his numbers. He is learning his shapes and colours and is getting quite good at his animals and their corresponding sounds. Samuel has also gone from being unable to sit through a baby board book to sitting for 30-40 minutes of bedtime stories at night, engaging with the books and telling me what's going to happen next. Finally, Samuel is learning to tell time (digitally) and tie his shoes.

When I sit down and write it all out, it's hard to believe how much Samuel has accomplished in only three months. I am so proud of my little man and all the hard work he has put in these past few months to get to where we are today. This weeks marks Samuel's last week of preschool as well as the end of all of our morning playgroups.
That leaves us 2.5 months before school starts.

Our current goals:
3) Continue working on pre-academics. Specifically, I would like Samuel to be able to consistently recognize numbers 1-10. I also want to work with him on cutting with scissors, writing (I don't care what he writes/draws, but right now he only scribbles with no intentionality behind it) and maybe starting to recognize a few letters.
2) Articulation. Samuel's vocabulary is amazing and he is regularly speaking in full sentences but I am still usually the only one who can understand him. Now that he has such a strong desire to socialize with other children, I would love for them to be able to understand what he's saying so that they can actually play together!
1) Lot of swimming, picnics, playing at the park, getting dirty, etc.

After a very busy three months, our full-time job this summer is fun, fun, FUN.
I plan on making the most of what may be our only full summer together. I promise to post pictures of all the fun but as for written updates, well, this may have to hold you over till the fall :) 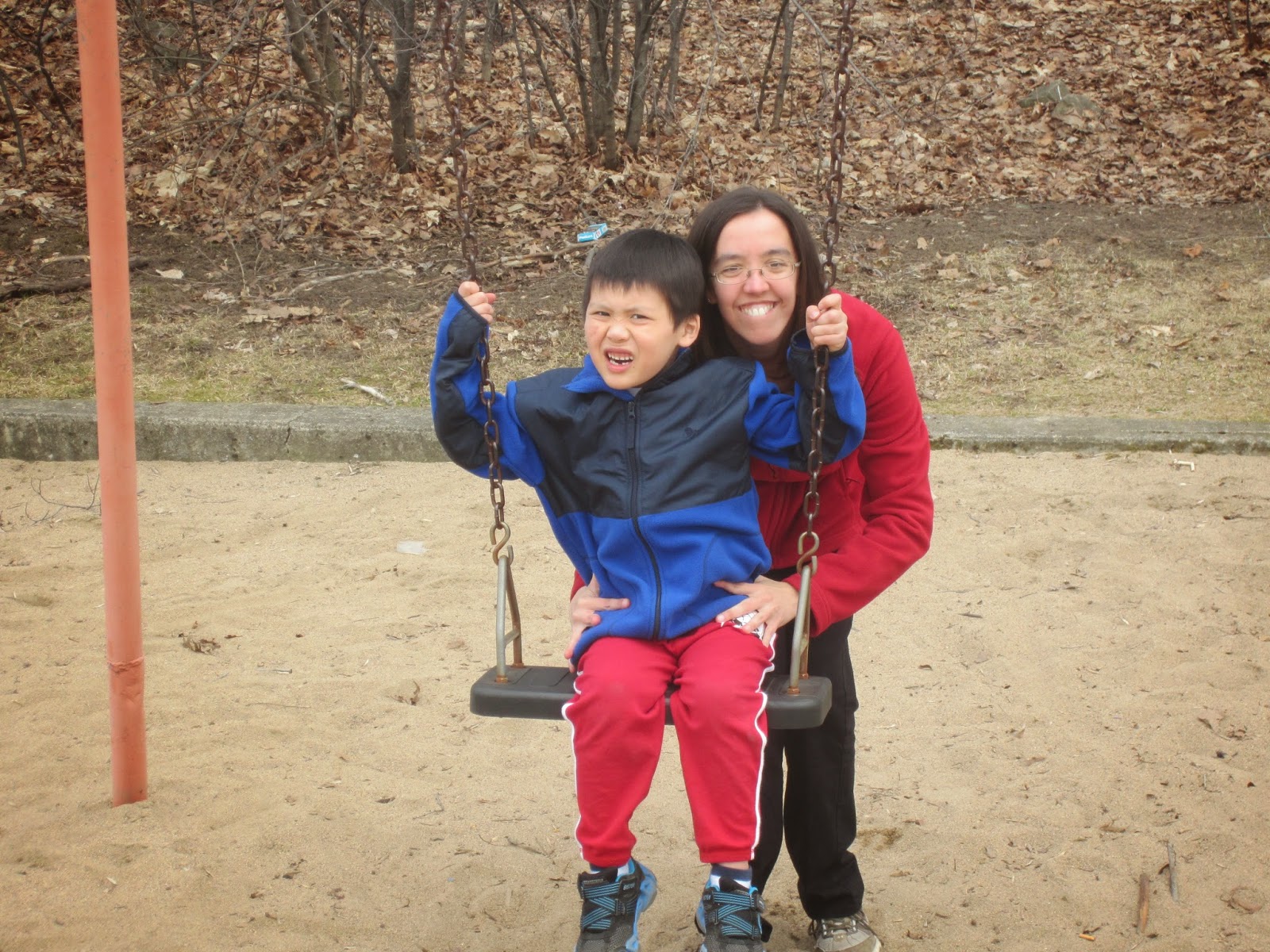