Happy Thanksgiving (over one week late...)

Sorry for my lack of blogging lately... I figured the sheer length of my last post would keep you all busy for a while :)

The last few days around here have been pretty challenging and although I know it could be so much worse,
I still feel like it's taking all I have just to keep my head above water. Still, I have so much to be thankful for
and on that note, I decided it was time to post about our Thanksgiving.
(Canadian Thanksgiving was last Monday for all my confused, American friends...)

Obviously the concept of holidays is still lost on Samuel but I was determined to find a way for him to participate, other than just eating turkey! Samuel has no interest whatsoever in anything crafty but I nevertheless managed to trick him into making a Thanksgiving centrepiece... On Sunday we went to the park and Samuel enjoyed walking through the woods collecting leaves for a few minutes and was then quite content to sit in his chariot (i.e. stroller) and order his servant, I mean mama, around telling her which leaves to hand him so that he could put them in his bag. When we got home, Samuel had fun arranging all of the leaves, sticks, etc. inside of a vase. Actually, Samuel thought he was making soup (his absolute favourite game)... shh, don't tell him he was actually doing a craft! 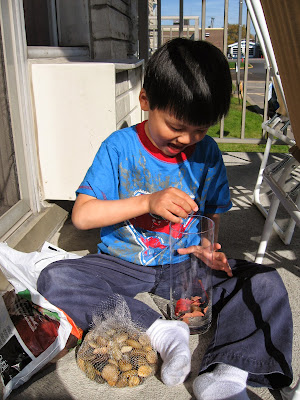 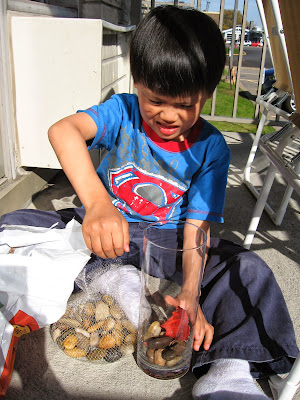 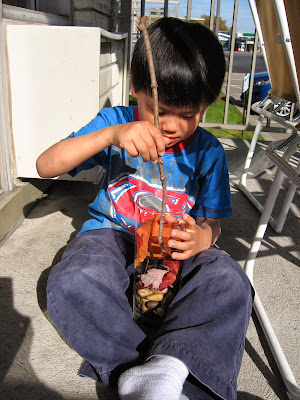 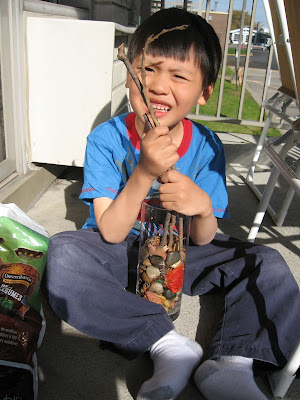 On Monday we glued on some little leaf cupcake toppers that I found at the dollar store
(ok, I glued, Samuel pointed at where I should stick them). 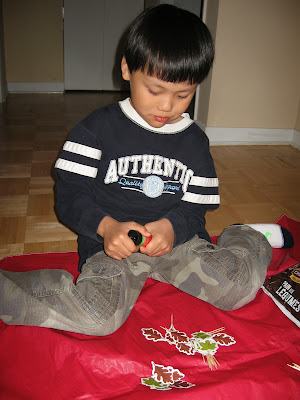 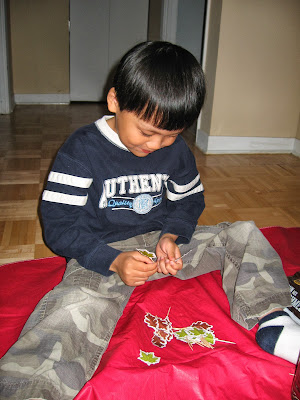 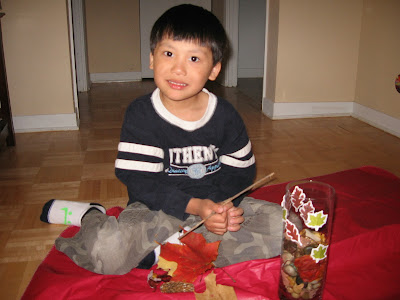 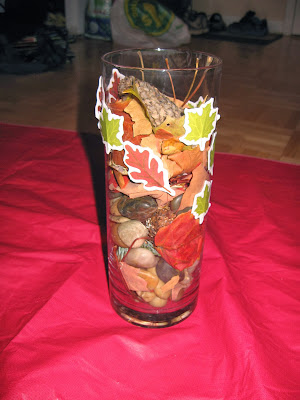 In the end it actually turned out ok and looked pretty good on the dining room table. It was fun to watch Samuel's confusion turn to pride when we took his creation over to Grandma's and she put it on the table. It was especially fun to watch his little smile when he saw that it was still there the next time we went over. Just for the record, no this hasn't increased Samuel's interest in crafts but you can't blame a mama for trying!

I wasn't sure how Samuel would do at our family's Thankgiving dinner but he was amazing. He knew all the people who were there but it was his first time being with everyone at the same time and up until that weekend, he was still really quiet and clingy at my mom's house. On Thanksgiving however, Samuel was in his glory! He laughed and played and laughed some more for an hour with his mama, aunt and uncle before my grandparents got there. The sweetest moment came after my grandparents arrived. They were sitting on the couch with my brother and all of a sudden Samuel grabbed my hand, led me over to the couch and squeezed in between my brother and grandmother. Samuel sat there for several minutes, smiling and just looking at all the people around him. My mother put it best when she said it's like he was thinking, "They told me I had no one but just look at all these people who love me..." 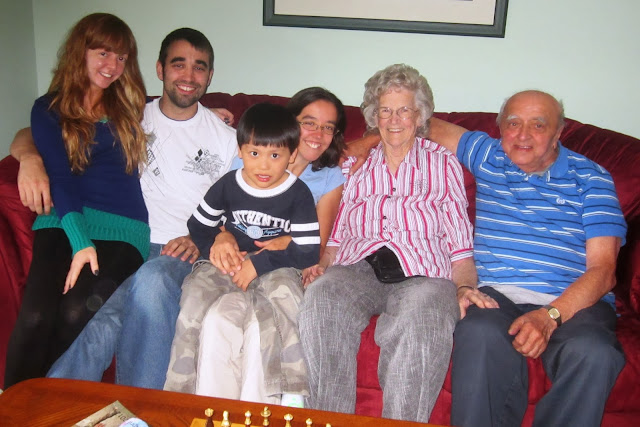 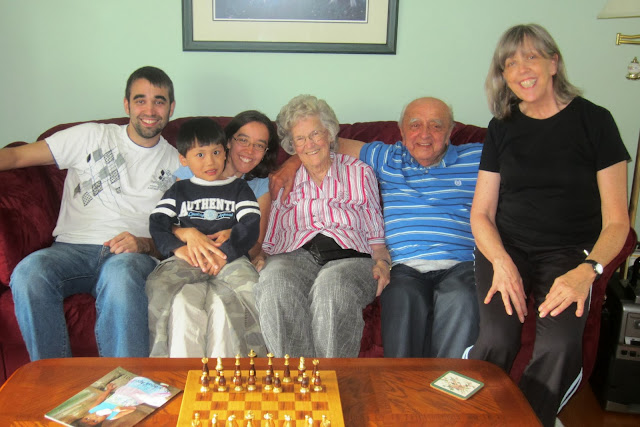 Precious boy... unwanted by some but cherished by so many.

I don't think I have to tell you that Samuel devoured his dinner and turkey has now officially been added to the list of meat that Samuel loves. Samuel sat in his own chair (not on my lap) at the table for the first time outside of our house.
It was like he got it and I think he was thankful for his family...

Sweet boy, I think it's safe to say that the thing that everyone around that table was most thankful for was you.

Ok you have been tearing up with each post...he is just so. Beautiful.

The Priests are Growing! said...

Andrea, I don't know how I missed this. Yay! I am so happy for Samuel that he has found his family! God is so good! We love you!

That is cute and awesome! What a smart idea! I love that he was proud of his project! Maybe he'd like this marble painting craft? http://craftsandartforchildren.blogspot.com/2010/12/christmas-marble-painting-candy-cane.html Makes for something cute to hang on the refrigerator, even if it isn't as helpful for fine motor skills as most crafts...