I am writing this post with my son asleep in bed beside me... Yes, that's right, I am officially a mother and Samuel is officially my son! Today was both a beautiful and heartbreaking day all at the same time. When Samuel arrived at the Department of Justice with the director of the orphanage he willingly came to me and it was as if he understood what was going on and was ready for me to become his mom. The ceremony was short and simple yet all I needed to hear was, "On this day, August 30 2013, we approve you to become this child's mother..." and I was done in. 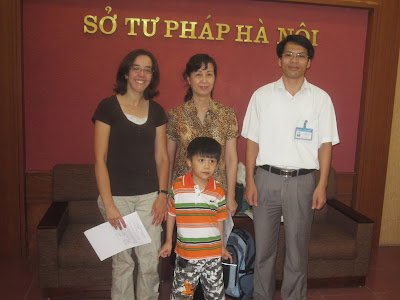 The hardest part of the ceremony was watching the director say goodbye to Samuel. She kept hugging and kissing him, reminding me of his likes and dislikes, telling me to make sure I hold on to him as he didn't understand danger and would likely run out into the street, etc. You could tell she really loves him and how much she is going to miss him and, as someone who has had to say goodbye to many orphaned children whom I have loved as my own, my heart really went out to her. 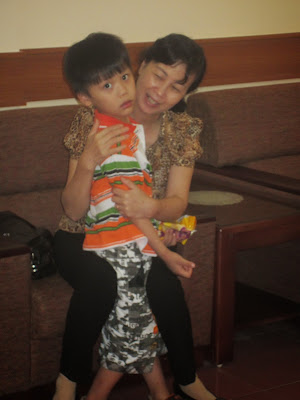 Samuel did so well in the car and as we stopped to get his passport pictures taken. I don't know what God has been whispering to Samuel's heart these past couple of days but it was clear God had been preparing him. You could tell he was overwhelmed and definitely scared but he melted into my arms and seemed to feel safe with me. 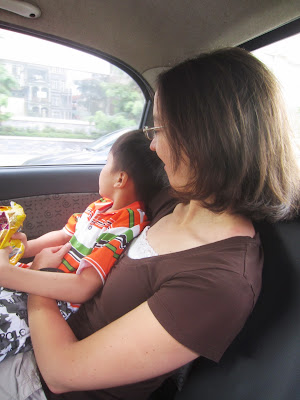 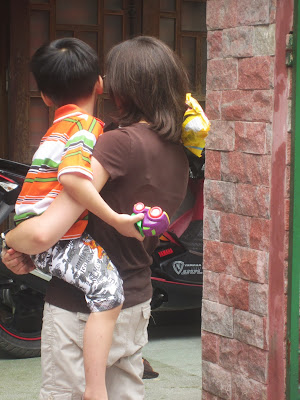 The tears started when my facilitator dropped us off at the hotel and continued off and on over the course of the afternoon. There were no screaming fits or long bouts of sobbing but tears of sadness and grief which broke this mama's heart. Nevertheless, he looked to me for comfort and clung to me most of the afternoon and I was so thankful to God for the opportunity to pray over my son and hold him close.


I ordered my son Vietnamese fried rice for supper but he preferred mommy's pasta (great news for mommy who much prefers pasta to rice!) and the day ended with a sweet smelling boy, freshly showered, falling asleep in his mama's arms...


As much as I am grieving all that my son lost today, I also cant help but celebrate the victory that this day represents. my facilitator has made it clear that if Samuel was not adopted he was likely within a month of being transferred to an orphanage for older children and adults with special needs where he would have remained for the rest of his life with his basic needs taken care if but nothing more. Today however, Samuel was given hope and a future. So turn your speakers and celebrate with me... There's One Less Orphan in the World Tonight!!!

Happy tears here, Andrea!!! Congratulations to you and Samuel and the rest of your family. What a beautiful post!!! Praying for you that the rest of the process goes smoothly.

Cogratulations Andrea! Samuel is too beautiful and cannot wait to see him blossoming into your arms! Let's celebrate! xxxxx

Congratulations mama ❤thank you for updating the adventures of you and Samuel ;) the real adventures are just beginning as your life as a mama begins! Looking forward to hear the rest of your travels - most importantly, that you are all back safely in your home!

Congratulations!! Samuel is such a handsome little boy! what awesome love.

Andrea - my tears are flowing - you have been so faithful in knowing, sharing and waiting for this precious boy that God has given you and all of us. We continue to pray for Samuel, you and mom. May the LORD continue to speed your trip home. Hugs, Love and Prayers, Grandma

Praise the Lord!! Congratulations on becoming a mother. Thanking God for giving Samuel a chance to be a cherished son.

Congratulations from a dutch blogreader.
I followed your blog since your eatern europe adventures and i love how you love!
I am so happy for you and Samuel, and thank God that He brought you together! May He bless your family and restore precious Samuel into a man after His heart!

Celebrating!!!! SO happy for you.

I do not know you, came across your blog by through a friend; I was in Vietnam 2 months ago, to get my little 3 years old girl ! One thing for sure, we feel the love in your words and in your eyes ! Really happy for you !
Another single mom !

Oh tears! I'm so happy for you both - even while feeling sad for him. You're worth it. :)

So SO happy for you and your sweet boy!

Andrea! I keep leaving comments but they aren't posting..... hope this one posts! Just want you to know I am with you by praying! LOVE LOVE LOVE all your have shared here and I just don't have the words to say anything but to proclaim with you, "GOD IS SO GOOD!" Tears are falling in happiness for you and sweet Samuel. Love, Jenny

Congrats Andrea and Samuel, The pictures are amazing. Take care and enjoy your time together.
Love, Nathan, Shannon, Zach, and Rylan