Well, there was a change of plans this morning (welcome to the world of adoption!). The director of the orphanage couldn't make it to the adoption ceremony this afternoon so it was postponed until tomorrow morning. I didn't care though because this morning, I was granted a true miracle. I guess I should start at the beginning...

Even though the adoption ceremony was postponed until tomorrow, the orphanage still held Samuel's  adoption party this morning. I have to say, I have been so impressed by how much the staff at Samuel's orphanage love and care about him. Those of you who have adopted from Eastern Europe will understand how significant this is... This morning the orphanage threw a party for all the staff and kids with a table full of sweets and fruit, all provided by the orphanage. The director presented me with a big bouquet of flowers to congratulate/thank me. After the ceremony tomorrow I will get to keep the clothes Samuel is wearing. The orphanage is also giving me one of Samuel's bottles and the stuffed animal/pillow he sleeps with in order to help maintain some familiarity for him.
﻿﻿﻿﻿
﻿ ﻿﻿﻿﻿﻿

The highlight of the party was when Samuel showed me a whole new side of himself that I never could have fathomed... The boy was made for show business!!! They handed him a microphone and before I knew it, without anyone saying a word, my son stood up on his chair and started singing a song! I was laughing so hard, I couldn't contain myself.

Now back to my miracle... Honestly, I don't even know how it happened. We went back to his room after the party and were just hanging around and all of a sudden this little boy, who wanted pretty much nothing to do with me yesterday, was up in my arms - by his own volition! I must have held him for a least 10-15 minutes, his legs wrapped around me, his hands holding onto my shoulder... He didn't want me to put him down. If you had seen him litterally running away from me yesterday you might be able to understand a bit better what a true miracle this was. Even the caregivers were shocked and my facilitator was in tears (not to mention my mother and myself). All I kept saying was "Thank you Jesus, thank you Jesus, thank you Jesus..." When it was time to leave, the caregivers told Samuel to say goodbye to me as they have done every other time. Normally he just stares at me blankly as they pick his arm up and wave for him but today he came over to me, put his arms up to be held and wouldn't let me go. Now if that's not a miracle, I don't know what is. (and in case all that wasn't enough, my son also said his second English word today - water) 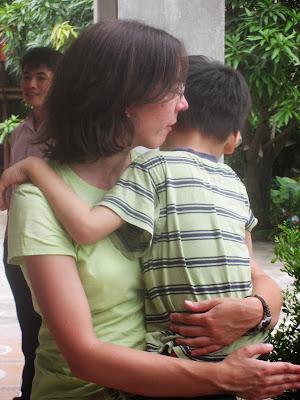 I am by no means assuming that this means that tomorrow will be any easier for him however this morning did this mama's heart good. Thank you so much to the army of people who were praying. Your prayers were certainly not wasted and God is answering them, although He clearly had a different plan for today. The adoption ceremony is at 10:00 tomorrow morning (9 p.m. Thursday Montreal time) and I would so appreciate your continued prayers. After the ceremony tomorrow we will be going to apply for his Vietnamese passport and then the rest of the paperwork will likely take place on Tuesday. My facilitator says that his passport could be ready in as little as a week so we may very well be out of here early. That said, this is adoption and anything can happen :)

Next time you hear from me, I should officially be a mother!
Posted by andrea at 10:11 AM

Crying tears of joy for you and your boy....Praise Jesus....he can feel the love of God from you! Continued prayers!

God is so good. I love the fact that you had a day of "loving" before you take him from his familiar friends and caregivers. He is such a beautiful child and it looks like lots of hugging is in store for Mom and son. Enjoy every minute!
Praying for all of you.

Oh my! Let the tears begin...i had just finished reading/crying and I went to mom's place and she came up the stairs wiping her eyes...I asked what was wrong and she said I just finished reading Andrea's blog post! LOL! God is good and He will take care of the attachment and bonding...He will make it happen!!!! What an amazing video to watch. Hope all goes well at the ceremony. Jess :-)

Incredible! Him clinging to you, and the party, are both great. I'm so glad to hear it. Looking forward to more. :)

Blessings on you and your precious son! - From a Canadian adoptive family with 2 little sons from Vietnam.

Just a few more hours! Your video of you holding Samuel brought me to tears. Praise the Lord. :)

Thank you for this beautiful post, Andrea. I am so happy for you and Samuel. I hope all goes well tomorrow. Can't wait to see more pictures.

The day you accepted your destiny to be a mama, is the day you became a mama ;) all the stress, tears and moments of overwhelming "what on earth did I..." Is exactly what every mother feels either through pregnancy, or adoption. Andrea you are going to be amazing - just the consideration you have for the loss that Samuel is going to be going through - shows how much you love your child that you just "met".... I'm done rambling - looking forward to more updates! Cecilia