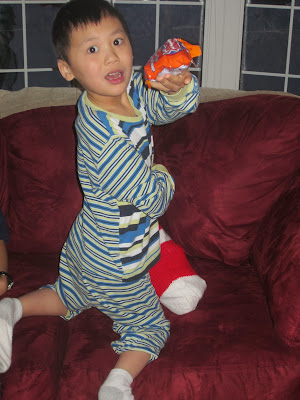 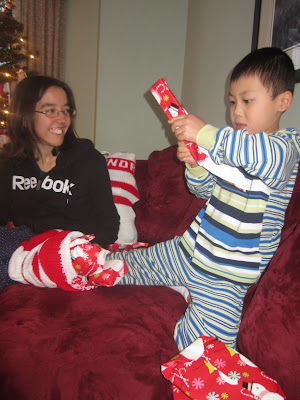 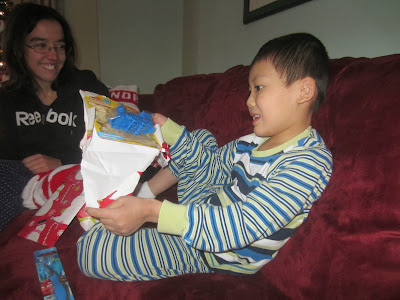 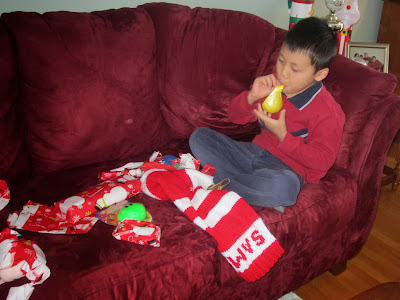 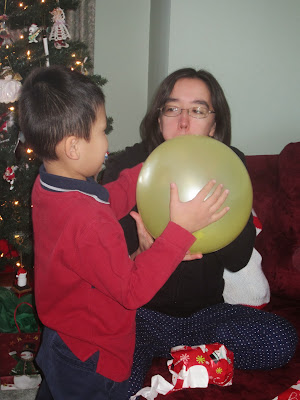 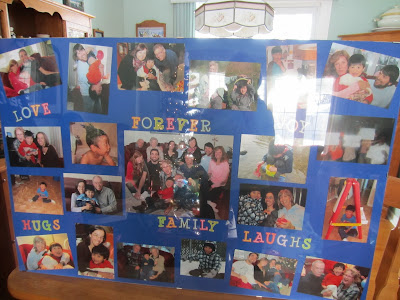 God you're so good!

Merry Christmas from our family to yours!
Posted by andrea at 10:50 PM 4 comments:

Today is December 1st which for my family always marks the beginning of the Christmas season. This year it's especially exciting as Samuel will be spending his first Christmas surrounded by a family who loves him. He will decorate Christmas trees and bake Christmas cookies and open presents and participate in reaching out to those in need... Meanwhile, 163 million children around the world will spend yet another Christmas without a family.

As we prepare to celebrate this holiday season...

Would you consider opening your heart and home to a child who wants nothing more than a family of their own?
No, it won't be easy, but it will be the greatest gift you could give yourself / your family this Christmas.

Today was Samuel's first birthday... My son turned five years old today yet his birthday was truly celebrated for the first time in his life. I'm warning you now that this is going to be a long post - I want this weekend well document so that neither of us forget a single detail and I also want to share all the joy of these past three days with all of you who have helped us get here!

The festivities started on Saturday when Samuel and I went over to my mom's to help her decorate Samuel's birthday cake (my mom is a great cake decorator but recently had shoulder surgery and has one arm in a sling). Samuel enjoyed trying out his own decorating skills and especially liked sampling the icing!

I'm going to save the best part for last and skip ahead to today, Samuel's actual birthday. I decorated my apartment last night in hopes that it would help Samuel realize when he woke up this morning that today was a special day. 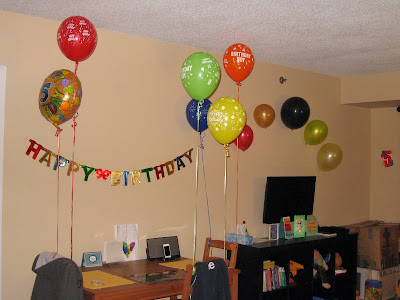 Unfortunately, when Samuel woke up he had to pee so bad he didn't make it to the toilet which resulted in him sitting on the bathroom floor in a puddle of pee and tears :( We cuddled for a bit and once he recovered he had a great day, the best day he's had for as far back as I can remember!

We had plans with our amazing neighbour friends today but unfortunately their kids woke up sick so we ended up just hanging out at home. Given that I had to clean my bathroom, I decided to take the opportunity to clean the rest of my house as well as it was overdue and I let Samuel vacuum...

After about 20 minutes (he really does love to vacuum!) Samuel decided the vacuum was too loud so I let him eat grapes in bed while I finished up...

Samuel and I played all morning and for lunch we had his favourite, scrambled eggs, along with some pigs in a blanket leftover from his party. Samuel ate the pastry all around and then gave me the hot dogs... Samuel wasn't interested in leftover birthday cake for dessert so I gave him a cake pop that his Nana had bought him. Samuel ate the candy coating and then gave the cake part to his mama :) 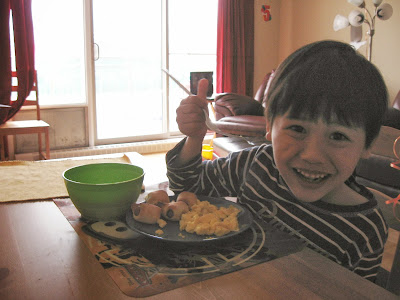 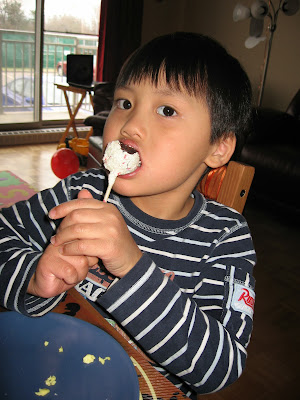 In the afternoon we had visits from Samuel's future babysitter (she doesn't babysit him yet but comes by to visit so that Samuel can get used to her... not much of a problem as Samuel adores her!) as well as his great-uncle. We ended the day by inviting grandma over for dinner... Shepherd's pie of course!!!

Ok, rewinding to Sunday, the big day - Samuel's first ever birthday party!!! (for pictures see the video at the end of this post) I decided that it would be just family for this year but just family still worked out to twelve people plus Samuel. We had Samuel's grandma, his grandparents and great-grandparents, his aunt and uncle and his godparents and my aunt and uncle (Samuel's great aunt and uncle) even flew in from PEI to be here for Samuel's special day! At one point I was a little worried about how Samuel would do with so many people but I clearly had nothing to be worried about. Like I've said before, Samuel's absolute favourite thing is to be surrounded by his family and to have all the people he loves so much in one room... he was in his glory from the moment he walked in the door!

While we were at church my brother and sister-in-law decorated the house. When we arrived Samuel could see the decorations from outside and ran up the stairs into the house. After peering around the doorway, he threw off his shoes and coat, stood in the middle of the living room taking it all in and said, "WOW!" Priceless. It was like he somehow got it and he was instantly so excited. His excitement only grew as each new person arrived and Samuel spent the afternoon going from one beloved family member to another. Samuel enjoyed his spaghetti lunch however did not eat his usual heaping portion as he was distracted and had already filled up on chips (Baked Lays, the first and only kind of chips he has ever eaten... thanks Auntie Mel!). He didn't know what to make of the candles on his cake ("hot!") and although he did enjoy eating it, it was clear that he liked the icing much more than the cake itself (not surprising given that he doesn't like muffins, banana bread, etc.). After cake Samuel opened presents - his favourites were the tissue paper and the cash! It was fun to watch him in his imaginary little world playing with the tissue but the laugh out loud moment of the party was when Samuel opened a card from his grandparents, pulled out the money and immediately reached down to put it in his pocket! Where does he learn these things?!?! He played with his money for quite a while before I was eventually able to distract him long enough to sneak it away :)

I think I can safely say that Samuel had the time of his life - literally! As the day came to a close I looked around the room and the love was palpable. I was overwhelmed not just by everyone's immense love for my sweet son but by Samuel's great love for each of them. Samuel and I sing along to this song often in the car and as we sang it in church yesterday morning it could not have been more fitting... God is rewriting my son's story and turning it from a story of heartache and hopelessness into something breathtakingly beautiful.

"He will give a crown of beauty for ashes,
a joyous blessing instead of mourning,
festive praise instead of despair..."
Isaiah 61:3
Posted by andrea at 11:04 PM 7 comments:

October/November is one of my favourite times of year because it's... shoebox season!!! My family and I are big time fans of Operation Christmas Child, a project headed up by Samaritans Purse which delivers shoe boxes filled with toys, hygiene items, school supplies, etc. to children around the world. In fact, I am one of the only members of my family who has not had the privilege of going and delivering these boxes in person (one day... it's on my bucket list!). Every year my mom and I spend hours in every dollar store within a 20 mile radius picking out things we know kids will love and buying way too much stuff, causing us to have to fill even more shoe boxes! This year however was different. Although Samuel doesn't mind shopping, there was no way he was going to put up with multiple trips to multiple stores so we waited 'till the last minute and yesterday we did a one stop shopping trip to Dollarama to fill our shoebox. I let Samuel pick out which toothbrush or t-shirt, what colour Play-Doh or stuffed animal, etc. we should get and today I helped him pack it all up in the box. Obviously he didn't have a clue what we were doing and next year I'll be able to explain it to him better but its important to me that he starts getting into the habit of giving even now, before he understands what its all about.

p.s. I read this post tonight which was so encouraging and says everything I haven't found the time or the words to say over the past weeks... The title says it all: There's No Such Thing As An Easy Adoption
Posted by andrea at 8:23 PM 1 comment:

I have so many real posts (i.e. not just pictures) bouncing around in my head but just can't seem to find the time or energy to type them out... In the meantime, my sweet boy and I made cookies for the first time today and he was so cute, I just had to share the pictures! He did such a great job and there are so many things about baking cookies that even just a few days ago would have had him screaming in a puddle of tears on the floor...
Thank you God, after the past few weeks it looks like things are turning around!