My relationship with Igor took a little longer to develop than it did with some of the other kids. He was a favourite of one of my roommates who I was going to the orphanage with for the first several weeks so I held back while she played with him and focused my time on the other kids. It wasn’t until I started spending time inside the orphanage that Igor really grabbed a hold of my heart. 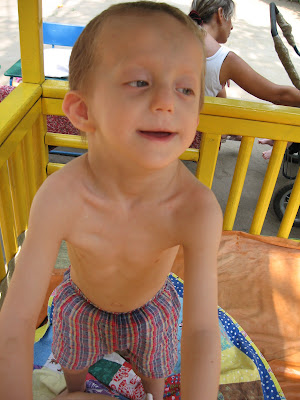 Outside, Igor does ok. He spends most of his time in the outdoor playpen but he doesn’t really seem to mind being in there. There was one time when I took him out of the playpen so he could walk around a bit and then made the mistake of turning my head for a second at which point he plopped down into the sand. The workers were not happy about him getting dirty and swiftly snatched him up and dumped him back into the playpen which resulted in a very upset little boy. Aside from that however, my observations from those first few weeks were that Igor seemed to be fairly calm and content. 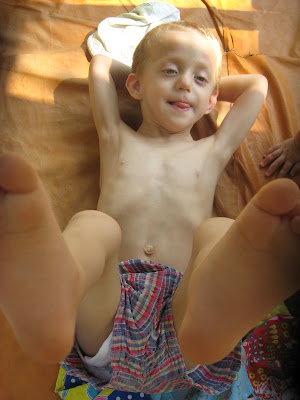 Inside however, was a whole other story. Igor did not do well in the chaos and noise that took place in his room. He dealt with it the only way he knew how, by repeatedly smashing his head on the floor. Igor wasn’t the only one of my kids who banged his head but with Igor it was different. He would sit with his legs spread apart and throw his upper body forward with the full force of his weight, banging his head on the hard floor over and over again until I was sure he would knock himself out. The workers did nothing to stop him, they just say back talking and laughing as if they were oblivious to what was going on. Out of all the things I saw inside the walls of that orphanage, watching Igor suffer day after day without being able to do anything about it was the hardest thing for me. 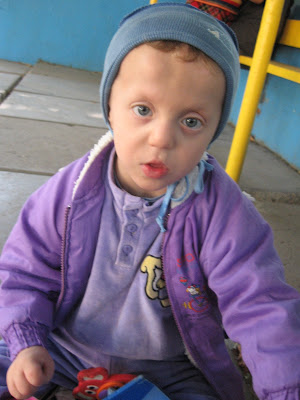 After seeing what his life was like inside the orphanage, Igor quickly took up permanent residence in my heart. I loved all my kids but Igor was the one I was most concerned about. Many days I would come home from the orphanage and cry in futility and frustration over his situation and I often fell asleep praying for him at night. Here’s the interesting thing though, while Igor was the one who seemed to be suffering the most, he is also the one I saw the most progress from. During our one-on-one times downstairs in the visiting room, Igor became a different kid. Upstairs, rarely did 15 minutes go by when Igor did not bang his head. Even if he was content sitting in my lap, playing with me, eating, etc. he would still use his fist to hit himself in the head every couple of minutes. During our one-on-one time however his self-harming behaviours decreased and eventually he was going a whole hour without hitting himself even once! He still had good days and bad days but on good days he was happy, walking around exploring his environment, snuggling in my lap as I sang to him, laughing as I tickled him, smiling big as he played with my hands (he LOVES hands!) and even making eye contact for seconds at a time! On those days I feel like I got a window into who he really is, a glimpse at his immeasurable potential if only someone would give him a chance. 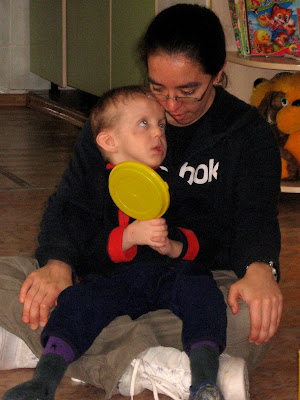 The day Igor was transferred my heart sank to my stomach. Knowing how he reacts when he is upset, afraid, etc. I was heartbroken thinking about him trying to cope in a new environment and, not knowing anything about the facility he was transferred to, I was afraid to think about how the workers might be responding to him. As it turns out, second of course to finding a family, being transferred was the best thing that could have happened to him. When I was finally able to visit him a month later, I couldn’t believe how well he was doing! Igor used to have what I thought were permanent bumps on his head the size of half a ping pong ball but when I saw him at his new orphanage those bumps had gone down considerably. I asked the workers about him banging his head and they told me that he did at first but that wasn’t doing it very often anymore; sure enough, he didn’t hit himself once during the entire hour we were there! There was more to it than that though, he just seemed so much more peaceful and content. He was free to walk around and do what he wanted and every once in a while one of the workers would stop and rub his back or scoop him up into their lap. 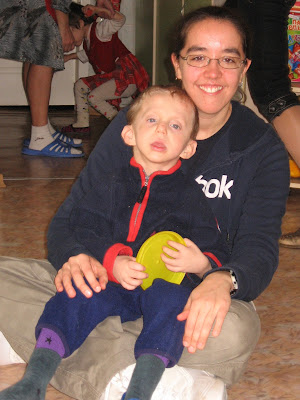 I’m so thankful that God allowed me to see Igor in his new orphanage and ease so many of my concerns. One concern remains however; if Igor is not adopted by the time he is eight-years-old he will be transferred again. I don’t know where he will be transferred to but, knowing the country he is living in, it is extremely unlikely that it will be as good as the place he is in now. I have seen how Igor reacts in an institutional environment and can’t bear the thought of him being subjected to that again. He needs a family. Again, I’m asking for your help. In celebration of their five year anniversary, helping over 500 children find forever families, Reece’s Rainbow has launched their 5/5/5 Warrior Project to bring greater awareness and grant funds to all of their 5-year old children. Being that Igor is 5-years-old, he is a part of this project and has a “warrior” who is trying to raise $5000 or more for his grant fund. Debbi is selling heart necklaces to raise money for Igor, how fitting since my 'nickname' for Igor is "my heart"...  Let’s rally together and help her out, shall we? A donation of $15 or more will make you the lucky owner of one of those hearts; mine is already on the way :) Right now Igor has $100 in his grant and I would love to see that number go up over the next few days. At the same time, would you help spread the word about this little boy and join me in praying for his family to step forward soon? Together we can see this little boy’s future changed for the better. For more information or to donate, click here. 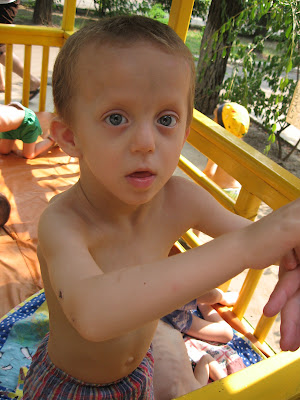 Igor is listed as “Brody” on Reece’s Rainbow;
in order to protect his identity, when sharing about him on your own blogs, facebook pages, etc. please use his Reece’s Rainbow name
Posted by andrea at 12:14 PM

ooo igor igor! he has stolen my heart as well. my tilly has smith magenis syndrome, which is a self harming syndrome and she also head bangs very badly. The thought of nobody caring to stop it fills me with sadness i cannot bear! I know these behaviours, i know the sound of those thuds, i deal with the bruises and the lumps, its heartbreaking but tilly is loved and cared for and celebrated. To put these behaviours into an institutional setting...really people it defies belief! this little boy needs a family so much. i pray that somebody reads this and can see his magic and will hear my words that these children are your lifes joy, even with the challenges. thankyou so much for sharing thi on the forget-me-not linkup xxxxxxxxxxxxxxx