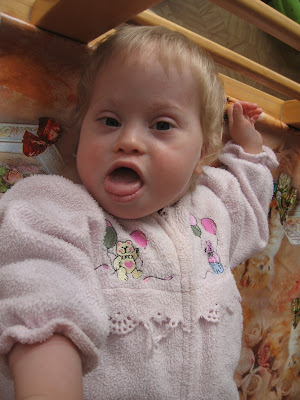 There is someone right now advocating for one of my angels. Her name is Stephanie and she is doing what she can to find a family for my sweet, cuddly teddy bear – Andrey (N.B. The Andrey I am referring to is “Big Andrey”, not baby Andriy, one of my “littlest angels” who I shared about last week). Stephanie recently rescued two angels of her own, beautiful little boys who were physically and emotionally wasting away at their orphanage in Ukraine yet are now blossoming in her family. Like so many adoptive families (and volunteers), Stephanie’s heart broke for all the children she had to leave behind and she came home with a passion to help many, many more children find their forever families. She has advocated for many children, one precious child at a time, and right now that child is my Andrey.

Andrey is one of the only ones of my kids currently listed for adoption. When it comes to Andrey, on paper, it doesn’t look good... Down syndrome, strabismus (crossed eyes), congenital heart disease, significant delays, recent regression, possible reflux, probable symptomatic atlantoaxial instability (a condition which causes weakness in the neck), etc. But let me tell you what a medical file can’t – this little boy is pure love, an absolute joy to be around! He loves to be held and cuddled, to laugh and be tickled and if you spent some time playing with him you’d see that he has a personality and sense of humour all of his own. You’d also see that deep down, this little boy is motivated to learn and to grow. When I first met him it was clear that he had been slowly regressing. He could hardly even sit up on his own and could not/would not bare any weight on his legs, even with help. After just a month of spending time with him just one hour or so a week, he began pulling himself to a stand, first when he was with me, holding onto my hands and later on his own, using the side of the crib. The problem is, this little guy is smart, he has caught on to the fact that no one expects anything out of him, no one cares. He has no one to impress with his newly learned skills, no one to cheer him on when he reaches new milestones, and so he has simply stopped trying. Yet I see so much potential in him, he just needs to be given a chance. 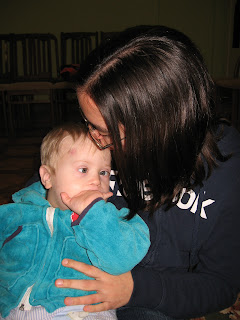 Please take a few minutes to watch this video that Stephanie put together. Then click here to read about what she is doing to help find this sweet boy’s family and how you can help.

Addendum - I re﻿cently received an e-mail from someone asking about something they read on Andrey's Reece's Rainbow profile where his caregivers describe him as a child who "selectively comes into contact with adults". She was concerned that this description made him sound autistic on top of everything else and was worried about what message that might be sending to prospective adoptive parents.
Here was my response: "I think the better way to put it is that adults selectively (at best) come into contact with him... Andrey was in two different groups during the time that I was there and he was very much ignored by all the workers in each group. Most of them did not even know his name and whenever I asked for him I literally had to point so that they would know who I was talking about. The first time I met Andrey it took a little more to draw him out but he quickly warmed up to me and began initiating interaction and playfulness. I am by no means an expert but I can say that I did not observe any autistic tendencies during the time that I had with Andrey. Based on my observations, he is a sweet little boy who is open and ready to give and receive all the love he can."
Posted by andrea at 3:25 PM

Praying with heartfilled love for this sweet boy.