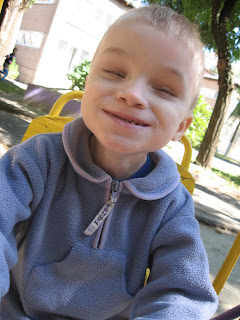 For those familiar with the plight of special needs orphans in Eastern Europe, there is one word that never fails to cause one’s heart to sink to one’s stomach – transferred. Last week two of “my angels” at the baby orphanage were transferred. Across Eastern Europe, orphaned infants, abandoned babies, etc. are brought to baby houses where they remain until somewhere between the ages of 4-6 years old, at which point they are transferred to an orphanage for older children. However in many countries, as well as in many regions of this country, children with special needs do not move on to orphanages like the other kids but are instead transferred to mental institutions. Sometimes these institutions are exclusively for children, whereas other times children as young as 4-years-old are placed in adult mental institutions; you can see why such news would make one’s heart sink. 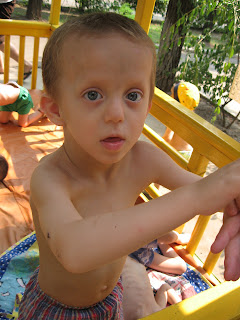 Anyway, back to my boys. We are fortunate enough that in this region children with special needs are not placed in mental institutions until the age of eighteen (what kind of world do we live in where a child placed into a mental institution as soon as they turn 18 is considered fortunate???). Nevertheless, my heart still sunk when I heard the news. My boys, Dima and Igor, transferred… Dima is blind and he becomes quite frightened and withdrawn in new situations. What’s more, there were two different families seriously considering adopting him and now that might not be possible since he is no longer at the baby orphanage. Then there’s Igor, my precious Igor… Igor is autistic and he engages in a lot of self-harming behaviours. The thing is, out of all my kids he is the one I’ve seen the most progress from. He’s become a different kid when he’s with me but whenever I bring him back to his room he reverts back to his old behaviours… I hate to think of how he’s coping in a strange, new place.
Over the past several days I have shed many tears and prayed many prayers for these sweet boys of mine. I worry about how they’re doing being stripped away from everything they’ve ever known, everything and everyone that’s familiar to them. In addition to all that, I miss them like crazy and I didn’t even get a chance to say goodbye. Most children with special needs are taken to the special needs orphanage once they age out of the baby orphanage but for some reason it seems that my boys have been taken to a different orphanage. I do know which orphanage they’re at however and while it is not one I’m familiar with, I’m hoping to be able to go visit them.

Would you please pray for Dima and Igor? Pray that they would experience God’s presence and know His peace even in this scary and confusing time. Pray that God would soften the workers’ hearts towards these boys and that they would be compassionate with them. Finally, pray that God would open up a way for both of them to be adopted – I don’t know if Igor’s even legally available for adoption but he needs a family so bad!

p.s. The adoption vote was postponed (again!) to this week… keep praying!
Posted by andrea at 12:23 PM