Have I mentioned lately that God is faithful? For whatever reason, I didn’t sleep much last night and as I lay in bed this morning, already tired before the day even began, I knew I did not have adequate strength to face the day. Inadequacy is a feeling I have come to know well over these past three months however and I have begun to see it for the blessing that it is as it makes me more fully aware of my dependency on God and allows His power to be made perfect in my weakness. And so my prayer this morning was simply, “God, You’ve done it before and I know you’ll do it again, please give me all that I need.” And did He ever! Today was to my spirit what the guesthouse breakfasts’ have been to my body…


As I mentioned yesterday, I met up with Bonny this morning and we headed off to Guyaza. It took us a little over an hour to get there but I continue to love driving through Africa and this particular trip also included a back road boda (i.e. motorcycle) ride, which is one of my favourite things to do in Africa, so I was in my glory (sorry Jenny, don’t be too jealous!). Once we reached Guyaza the first thing we did was go to visit the triplets. Three years ago, a family with 6 kids was struggling to get by when they discovered that the mom was pregnant. They wondered how they would ever provide for this new baby and then came the shocking news, she was pregnant with triplets! They simply did not have the means to feed these three new children and so Sam and Bonny stepped in, providing money each month to buy milk for the babies. I got a chance to meet the triplets when I was last here in 2007 and was excited to see them again. Well, they are not babies anymore and, although I was amused at how all three of them are completely different in size, I am happy to report that all three seem to be doing well and do not appear to be suffering from malnutrition. They were extremely shy / fearful of me, the Muzungu, at first but were all smiles when I pulled the beanie babies out of my bag and oh how I wish you could have heard the squeals of delight from their older siblings when they saw that I had brought some for them as well. My favourite though was the smallest of the triplets who held her teddy bear close to her chest and kept looking down at it and then back up at me, her smile lighting up her face. 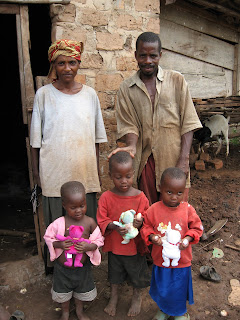 The parents with the triplets 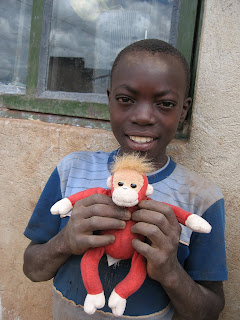 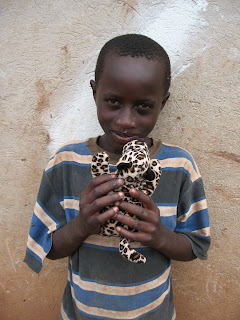 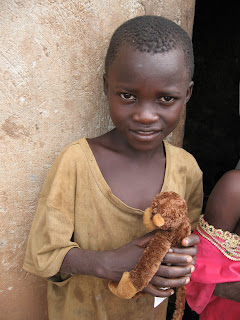 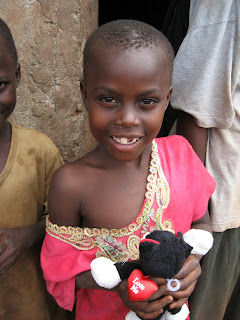 Some of their older children 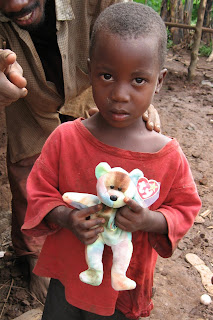 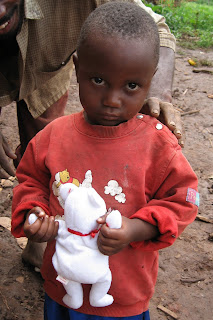 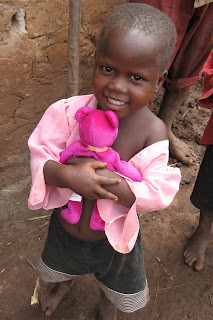 The triplets with their new teddy bears.
They were all smiles, until I started pointing my camera at them...
While in Guyaza I also got to see a bit of Kids Club. Every Saturday morning they do Kids Club with a group of children in Guyaza before heading to the slums of Katanga for their afternoon Kids Club program. Because Sam and Bonny have jobs, other responsibilities, etc. they are not always able to make it to both Kids Clubs every week and so they had to find a volunteer who would be able/willing to be there all the time. I met Nicholas at Kids Club in Katanga back in January but, given the chaos of the school supply distribution, I really didn’t get to talk to him. Today however, in between the two clubs, he took me back to his house to meet his wife and baby and I got to hear his story. Back in January I shared with you a little bit of Sam and Bonny’s life stories (if you haven’t read them I encourage you to do so by clicking here) and now I want to tell you about Nicholas. In 1997 Nicholas was serving a year in prison for assault when a preacher came and shared with Him about Jesus – a day that forever changed his life. To say that Nicholas is passionate about Jesus would be an understatement. Nicholas works on call as a builder however, no matter how badly needs the job, he never accepts work on Saturdays as he is committed to being with the kids, loving them and teaching them about God. He also goes every week back to the prison where he first heard about Jesus to bring that same message of hope to those who are there now. “There are times to work and times to preach the gospel,” he told me today, “God will provide.” Nicholas has a one month old son named Philip (I am loving all the chances I’m getting to hold little African babies!). When asked how many more children he would have I was surprised to hear him say just one or two (that is extremely small for an African family!). He then went on to say that after having one or two more children of his own he wanted to start taking in other children in need of a family. As you may remember, that is Bonny’s heart as well and that got us talking about how Bonny was praying that he might be able to buy a plot of land where he could build a home and expand his family (every week someone approaches him with a child in need of a home but he simply doesn’t have the space). Obviously, a plot of land is not something Bonny can afford yet he started sharing with us about what God had been teaching him lately. “Why do we limit God?” he said, “He is more than able. If we ask for small things He will give us small things but if we ask for big things He will do it.” One by one we all started recounting stories from our own lives of God’s provision in situations that were totally impossible. I continue to be challenged and inspired by these godly, passionate, self-sacrificing young men and in that moment I couldn’t help but think to myself, “This is a window into what heaven is going to be like, sitting around with brothers and sisters is Christ, all from different backgrounds and nationalities, sharing stories of God’s faithfulness…” 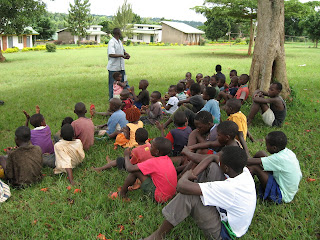 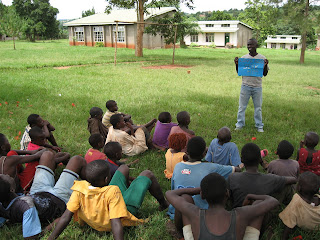 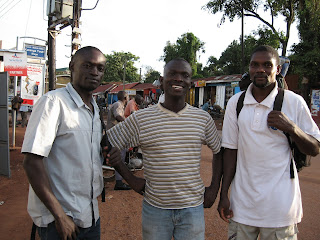 Sam, Bonny and Nicholas
After stopping for lunch (I ordered beans and was so thrilled!) we headed over to start Kids Club in Katanga. I wish I could tell you more about what a “normal” week of Kids Club looks like but in the end I didn’t really see any of it. Just before Kids Club started I noticed a little boy with a rash like nothing I have ever seen before. It covered his whole face and head and was scattered across his arms and legs as well, so thick that at first I thought it was burn scars. Bonny and I spotted him at the same time and as we looked at each other I knew we were both thinking the same thing – “We’ve got to do something for this boy”. So, we headed off with the boy to go find his mother. As we did I got a real inside look at Katanga and it is a true slum in every sense of the word; cramped, flies everywhere and a river of sewage running straight through it. Nearly every child I saw was filthy and visibly malnourished and I found myself being filled with a deep love for that place while at the same time overwhelmed by the great need. That feeling of being overwhelmed only grew as we found the boy’s mother. She told us that her husband had died of AIDS a couple years back and now she, along with at least two of her six children, were also infected. The mother had no job and no money and could not afford the medication needed to treat her son’s rash. All of her children had been kicked out of school because the mother was unable to pay their school fees and, what’s more, we discovered the family had not eaten in three days. After hearing all of this, Bonny and I both stood there feeling totally overwhelmed. What do you do in the face of such all-encompassing need? We started asking more questions and found out that the mother had been taking her children to a local AIDS clinic that Bonny knew of. They had started Paul, the boy with the rash, on ARVs and had told the mother that she needed to buy additional medication to treat his rash however it was very expensive. We also discovered that a group of students from the university had been supplying that family with food however the university was now on holiday for a month and that was why they had not eaten. It began to feel like there might be a way to help after all. Bonny and I went and bought enough food to last them the next couple of days and told the mother that we would be in touch. The two of us agreed to pray about it tonight and talk more tomorrow about what we might be able to do. Would you join us in praying that God would give us the wisdom and resources needed to help this family in the right way? I’ll keep you posted.
Posted by andrea at 2:53 PM